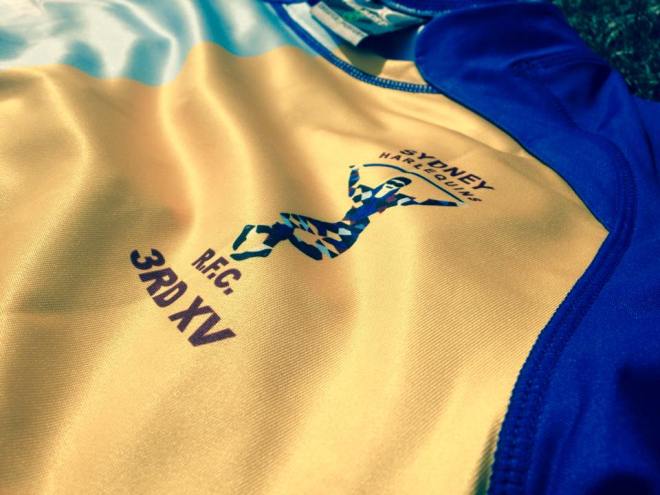 It’s 5 wins out of 6 for the Sydney Quins’ grades in 2015, as Sydney Convicts were soundly beaten on all 3 levels in Rose Bay on Saturday.  The day started with the 3s game at Lyne Park in a similar fashion to the trial game – warm sunshine and a few hangovers…  Add the new Gilbert match-day stash, and you have a find day at the office all-round for the Quinnies:

Controversy reined at Lyne Park, where forward Chris Kemp was allowed to kick a conversion.  Despite strict club rules (to which no drinking fines have yet been administered), the fact that he actually nailed the kick and that the existing kicker (Face-Off’s very own Sean Archer) had previously made various questionable efforts at toe-poking the egg between the posts, Kemp is yet to display any remorse for what will be soon be proven to be utter arrogance in the face of club discipline.  His fine performance and try may count in his favour, but the website team demand justice.

Moving on, the Quins 3s ran out winners with a commanding performance to move top of the pile in the Walker Cup.  Veritable man-mountain Ryan Marvais scored the first 2 tries, by simply picking the ball up, running forward and placing the ball down over the try line.  Many other humans tried to stop him, but he ignored them by generally being bigger than most mass transit vehicles.  He’s enormous.

Further tries by Nick Lewis, Zach Meredith, newly-Australianized Chris Kemp and an excellent counter-attacking run by Ryan Brady won the game despite the best efforts of a good Convicts back row.  More to come, but this team are gelling nicely.

The 2s’ Grose Cup campaign goes from strength to strength, with a comprehensive victory at the Woollahra Oval.  While envious eyes from a nearby Division 1 game looked over, a strong Quins team (with no substitutes used whatoever) scored 9 tries against a spirited and disciplined Convicts side.

Dom Caria returned from a holiday home to start his first proper match at scrum-half, while the return of Ben Jones, Ardi Haimona and Ben Donald boosted the team sheet.

Anthony Murray scored the first try – early pressure saw the ball spun wide and, after a Haimona pass through his own legs, Murray stepped inside and got pushed over by supporting players to touch down in the corner.

Gregor Quinn also touched down, before picking a fracas with a Convict – no doubt a row over beard conditioning products.

There will need improvements in the set-piece and general fitness, but the support play throughout was excellent.  Many of the 2s players played an entire half in the 1s and they should be credited.  Dom Caria played well and improved communication, while the entire pack worked excellently in providing momentum for a rampant back-line.  Ben Jones was superb in organising a team that keeps growing in confidence.

The Quins 1st grade worked hard for their result against a disruptive Convicts side, and succeeded thanks in no small part to supreme performances from Luke Elford, Matt Fisher and Steve Hiles.

After the previous week’s ill-discipline against Irish, there is still much to improve on given 2 more yellow cards.  Despite some selective decisions made by the referee (Matt Fisher’s amazing catch from a kick-off and being laid horizontal before any one of his twenty stone touched the ground just one example), even the supporters were warned about their protests.  Plainly speaking, we need to be stronger in respecting decisions, and better with provoking any.

That said, this game was interspersed by some good back-play.  James Archer went off with a heavy knock to the leg, which meant Pat ‘Ratty’ McDonnell could entertain with various no-look passes and his curious goose-stepping sprint.  His try, darting over from a try-line ruck via the kind of dummy that dreams are made of, was a highlight.  ‘Kiwi Dave’ David Jenkins scored literally the easiest try ever, as Convicts completely forgot they had a blind-side during one pressured phase.

Quins have a weekend off thanks to ANZAC Day followed by an away trip to Canterbury, who have also had an excellent start to their season.  Let’s keep the good work going.

Where are the Quins?